The Fairchild Swearingen Metroliner or the Fairchild Aerospace Metro is a 19-seat, pressurised, twin turboprop airliner first produced by Swearingen Aircraft and later by Fairchild at a plant in San Antonio, Texas, United States

Fokker 100 introducted in 1988 and produced until 1997 . They were built 283 airplanes .Fokker 100 is a twin engine , jet airliner for medium range and developed from the Fokker F28 . Airplane is out of production but still in service and made its first flight in 30 Novemberl 1986.Airplanes were manufactured from Fokker in the Netherlands

Fokker 50 introducted in 1987 and produced until 1997 . They were built 213 airplanes with average cost about $17.5 million.Fokker 50 is a turboprop airliner and its the continue of the Fokker F27 Friendship . Airplane until today is Operational with varius airlines and made its first flight in 28 December 1985.Fokker 60 is an extended freigher version of the Fokker 50. All airplanes were manufactured from Fokker in the Netherlands

Fokker 70 introducted in 1994 and produced until 1997 . They were built 47 airplanes plus one prototype.Fokker 70 is a twin engine , jet airliner for medium range and developed from the Fokker 100 . Airplane is out of production but still in service and made its first flight in 4 April 1993.Airplanes were manufactured from Fokker in the Netherlands

Following the Fokker F27 Friendship, an early and commercially successful turboprop-powered regional airliner, Fokker decided to embark on developing a new turbojet-powered commuter aircraft that would build upon its experiences with the F27. During the design phase, a high level of attention was paid to market research and operator concerns; amongst other changes made, the prospective jetliner was increased in size, changing its maximum seating capacity from 50 to 65 passengers. During April 1962, Fokker announced the formal launch of the F28 Fellowship.

The Ilyushin Il-114 (Russian Илью́шин Ил-114) is a Russian twin-engine turboprop airliner designed for local routes. In the Antonov An-24 class, it first flew in 1990. Altogether, 20 Il-114s have been built. 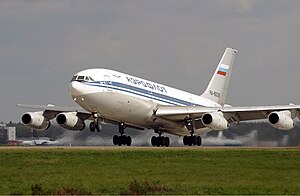 The Ilyushin Il-86 (Russian: Илью́шин Ил-86; NATO reporting name: Camber) is a short- to medium-range wide-body jet airliner that served as the USSR's first wide-bodied aircraft. Designed and tested by the Ilyushin design bureau in the 1970s, it was certified by the Soviet aircraft industry, manufactured and marketed by the USSR.

The Ilyushin Il-96 (Russian: Ил-96) is a four-engined long-haul widebody airliner designed by Ilyushin in the Soviet Union and manufactured by the Voronezh Aircraft Production Association in Voronezh, Russia. It is powered by four Aviadvigatel PS-90 two-shaft turbofan engines.

The McDonnell Douglas MD-11 is a three-engine medium- to long-range widebody jet airliner, manufactured by McDonnell Douglas and, later, by Boeing Commercial Airplanes. Based on the DC-10, it features a stretched fuselage, increased wingspan with winglets, refined airfoils on the wing and smaller tailplane, new engines and increased use of composite materials. Two of its engines are mounted on underwing pylons and a third engine at the base of the vertical stabilizer. It also features an all-digital glass cockpit that decreases the flight deck crew from the three required on the DC-10 to two by eliminating the necessity for a flight engineer.

The McDonnell Douglas MD-80 is a family of twin-engine, short- to medium-range, single-aisle commercial jet airliners. The MD-80 series were lengthened and updated from the DC-9. The airliner family can seat from 130 up to 172 passengers depending on variant and seating configuration.

The McDonnell Douglas MD-90 is a twin-engine, short- to medium-range, single-aisle commercial jet aircraft. The MD-90 was developed from the MD-80 series. Differences from the MD-80 include more fuel efficient International Aero Engines V2500 engines and a longer fuselage. The MD-90 has a seating capacity of up to 172 passengers and was introduced into service with Delta Air Lines in 1995.

The MD-90 and the subsequent MD-95/Boeing 717 were derivatives of the MD-80 which, itself, was a derivative commercially introduced in 1980 from the DC-9.